As those of you who follow us on Twitter will know, we launched the Expanding German Studies project at the end of August, with a roundtable at the Association of German Studies conference in Bangor. Six fantastic speakers – Joseph Twist (UCD), Godela Weiss-Sussex (IMLR/Cambridge), Clare Bielby (York), Sarah Bowden (KCL) and Richard McClelland (Bristol) – and a very engaged audience of Germanists from around the UK joined us to celebrate the launch of the project, and reflect on a huge range of issues from critical positionality to the implications of our project for language learning. Here are the ideas we’re taking away from that discussion – and don’t miss the call to action at the end of this post!

Perhaps syllabus topics on ‘Literature of Migration’ or ‘minority writers’ minimise the complexity of some writers’ works, rather than helping to promote their importance within the curriculum.

First of all, it’s so important to choose our terms carefully. Joseph Twist, discussing what decolonising the curriculum would look like in German Studies, reflected on language teaching and university hiring practices, where we commonly refer to linguistic capabilities as ‘native’ or ‘near native’. Godela Weiss-Sussex, discussing Jewishness in the curriculum, questioned the term ‘minority’ itself: it assumes heterogeneity both of the minority and the mainstream, and can create artificial barriers as if the two groups were distinct or discrete. Perhaps syllabus topics on ‘Literature of Migration’ or ‘minority writers’ minimise the complexity of some writers’ works, rather than helping to promote their importance within the curriculum.

We need above all, Godela Weiss-Sussex suggested, to challenge our assumptions about ‘Germanness’ or ‘Austrianness’, and to view identity on a spectrum of individual positions. Sarah Bowden, discussing diversity before modernity, agreed, pointing to the need for historical awareness of how specific these categories are to the last two hundred years – as a medievalist, she sees the boundaries of German culture quite differently!

Perhaps most importantly for challenging ideas of ‘Germanness’, Richard McClelland reminded us, we have to see Germanness and the German language as part of an active dialogue with other languages and cultures. In Switzerland, German has developed alongside French, Italian and Romansh and as a range of dialects. This plurality shapes Swiss culture, but it’s also a model for showing the cultural contacts and influences across the German-speaking world.

Our teaching and research can take diversity into account by allowing for difference, difficulty and awkwardness in all sorts of ways. Godela Weiss-Sussex showed us how being ascribed ‘minority’ status can even be a catalyst for artistic creativity. Mainstream German-langu

age culture has been enriched by these challenges to set ideas and the difficulties they reveal. Sarah Bowden summed it up by describing the ‘productive strangeness’ of pre-modern cultures that challenge and unsettle our own critical positions and assumptions. We have to make serious efforts to access – both practically and conceptually – the materials of a culture far removed from our own. Any consideration of pre-modern works forces us to move beyond authors’ biographies. Texts and artefacts become products of communities; stories circulate and evolve.

It’s common in gender studies for researchers to reflect explicitly on their own position in relation to their materials: why don’t we do the same in German Studies?

Bielby emphasised the potential of reflexivity: how can we reflect on our critical positions and build reflexivity into teaching? We discussed this at length during questions, wondering how we might combine an awareness of positionality with materials that challenge our own identity or position, and how teaching can engage and enthuse students with the politics of research. 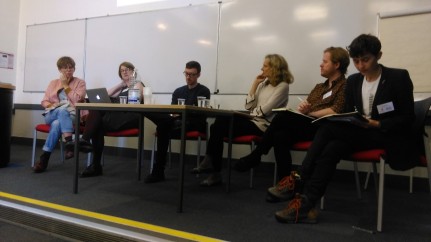 audience. Does expanding our curricula necessarily focus our attention on institutional hiring and admissions policies? So many of our universities continue to fail to represent in their faculty and student bodies the diversity of experiences in society, especially as regards race and class – and it’s also vital to remember that different universities have quite different student bodies with varied backgrounds, interests and expectations.

Many students have thought longer and harder about questions of diversity than most academics, and don’t necessarily view non-canonical texts as more of a challenge!

We discussed issues of accessibility. How do we teach cultural materials that are difficult to get hold of? For courses where works are taught in translation, there’s the further problem that translations themselves often prioritise canonical or bestselling works, often at the expense of diversity. This question also affects the genres we teach. So many cultural works are neglected on our syllabuses because they’re ephemeral: Richard McClelland mentioned performance, music is another important example, and other colleagues’ work points to dance, pamphlets, posters and the full range of posts, tweets and online art.

The question of ‘popularity’ also kept coming up. More diverse curricula appear to be popular with students, but we discussed the importance of not making assumptions about what will and won’t be popular, lest we simply perpetuate assumptions about high and low culture. Many students have thought longer and harder about questions of diversity than most academics, and don’t necessarily view non-canonical texts as more of a challenge! In fact, many have no existing expectation about what a German ‘canon’ might look like.

As Rey Conquer drew discussion to a close, we invited colleagues to submit ideas to the website to help pool our efforts and make it easier to expand our teaching in new ways. In the spirit of the project’s practical and collaborative ethos, we’d love to hear from you too, with either bibliographical suggestions or ideas for blog entries.

Thanks to everyone in Bangor for coming to the launch event – now, let’s get to work!