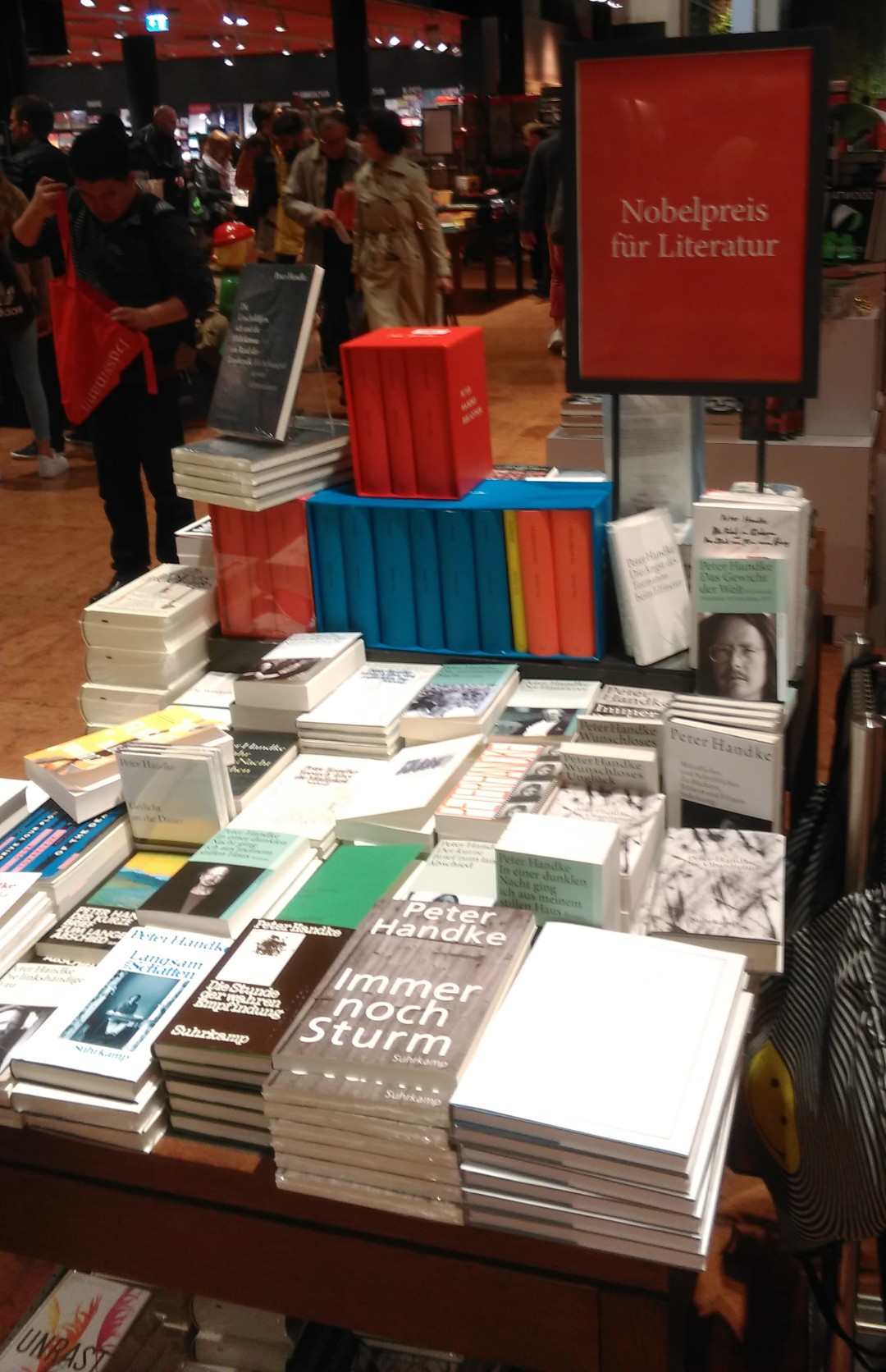 Should we teach Handke? Canon, curriculum and the Nobel Prize.

The awarding of the 2019 Nobel Prize in Literature to Austrian Peter Handke has been highly controversial. Here, Helen Finch (University of Leeds) considers the implications this has for Germanists and our responsibility to respond.

‘Should I read Handke, then?’ a student of German at Leeds asked me yesterday. I stuttered, stopped, hedged. Normally, I am thrilled when students show an interest in reading German literature in their free time. And I’m often touched when a student shows an interest in an author who has accompanied me throughout my career, as Peter Handke has, from undergraduate to researcher and teacher. But could I recommend that my eager student read Handke? I wasn’t sure.

In the international sphere, torrents of scorn have been poured out following Handke’s Nobel Prize award on 11 October 2019. In particular, Aleksandar Hemon’s article witheringly attacked Handke in the New York Times as the ‘Bob Dylan of Genocide Denial’. In Handke’s native Austria, reaction has been to some extent positive, including congratulations from the Green president Alexander van der Bellen, but by no means universally affirmative. How should we as teachers of German Studies react?

‘Wir sind Nobelpreisträger’ is a phrase that we have learned to be wary of, especially since Günter Grass’s prize (1999), which was swiftly followed by revelations of his time in the Waffen SS. But when literary studies seem to be increasingly unfashionable in undergraduate curricula and UK German departmental closures continue, a Nobel Prize win for a German-language author can feel like a boost of sorts. Look, the world’s best-known prize jury thinks that Austrian literature matters! 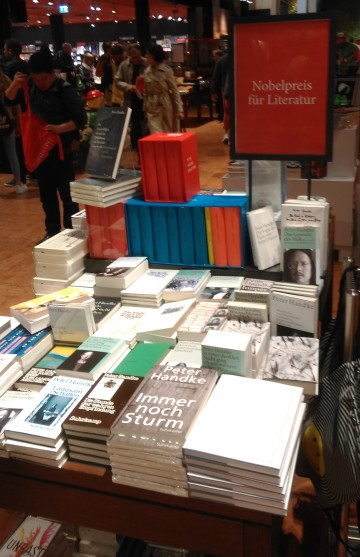 Handke’s texts on display at Dussmann, Berlin, this weekend.

So are we Germanists complicit in the celebration or even creation of a Nobel Prize win for a genocide denier? One constant in the discussion of Handke’s win was his elitist aesthetics, which have been seen as fulfilling ‘traditional’ Nobel Prize criteria. These same criteria – aesthetics that pay homage to a patriarchal tradition of Goethe and even Kafka, self-conscious analysis of European male subjectivity, echoes of Romanticism and high modernism, a concern with European history and memory, nomination for previous literary prizes, and race-blind or racist Eurocentrism – are also traditionally constitutive elements of the German Studies curriculum.

The criteria that won Handke the Nobel Prize are the criteria that made sure that he was on my undergraduate curriculum at Trinity College Dublin in 1993. In a sense, Handke’s writing career is the canonical post-war German literature curriculum: the attack on the Gruppe 47, Sprachskepsis, collaboration with the New German Cinema, a turn to neo-Romanticism and ‘new subjectivity’, a concern with the legacy of the Nazi past and flirtations with political positioning, followed by a blossoming eco-poetics that develops out from Die Lehre der Saint-Victoire. This representative quality is part of the reason I wrote a chapter of my PhD on Handke. And more: I and other feminist friends have taught Handke as part of gender studies, too. I’ve brought Wunschloses Unglück to students as a sensitive, devastating exploration of the psychological pressures that patriarchy imposes on women in rural Austria, a counterpart to Jelinek. Handke’s writing has a luminous quality, whether he is exploring the savage discipline imposed by language in Kaspar, or delving into Austro-Slovene history and geology in Die Wiederholung. Can’t we bring this luminous poetry to our students?

Yet this sketches out exactly the same whitewashed career trajectory that the Nobel Prize committee posted on their website for Handke. It leaves out the 1990s and the 2000s, the whining apologism for Serbian war crimes, the whatabouttery, the genocide denial – ‘there were camps on both sides!’ was Handke’s Trumpian claim – the speech at Milošević’s funeral. ‘When you say Handke’s words are beautiful, you say genocide is beautiful’, I was reminded on Twitter. Handke’s writing strives to transcend the historical, the temporal, while at the same time Handke aligns himself with war criminals. The dual move of transcendence and complicity is inherent to Handke’s aesthetics. Might it also be inherent to any aesthetics of transcendence that believes that art can be innocent of history and power? So how do we decolonise our curriculum not just of Handke, but of the inheritance of a right-wing literary canon that masquerades as idealist Romanticism or avant-garde art?

There are several ways that we could teach Handke. We can contextualise him within the context of the Bosnian genocide and the history of German and Austrian engagement in the Balkans; we could teach him alongside Bosnian-German authors such as Saša Stanišić, who three days after the Nobel announcement won the Deutscher Buchpreis. We can approach him as a case study of Austrian literary celebrity, of the toxicity of literary prize culture and of the problematic nature of the canon that we Germanists have inherited. But we should also be mindful of the words of Sara Ahmed in her new book What’s the Use?, serendipitously published the same day as Handke’s Nobel award:

‘Good habits in citation are about extending a line: you have to show how much you know of a field by citing those deemed to have shaped that field. To extend a line is to reproduce an inheritance’ (168)